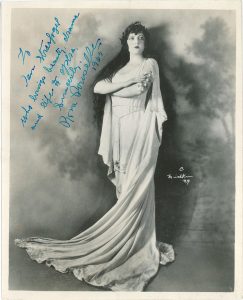 When the celebrity photographer Herman Mishkin took this picture in the 1920s, Rosa Ponselle was the reigning diva of the Metropolitan Opera and widely regarded as the greatest soprano of her time. He used a low camera angle to emphasize her supremacy. Every detail of the shot reinforces our notion of what stardom is, or might be- Ponselle’s imperious pose, her defiant glare, the sleek swirl of fabric that caresses the great lady’s slim torso. How stunning she seems, how imperious.

The Rosa Ponselle I met in Baltimore in the 1960s was very different from Mishkin’s imposing diva. She had been in retirement for over two decades, her svelte figure had broadened, her face had puffed up and sagged. I was twenty-five at the time, a young director on the rise. I had been engaged to stage a number of operas for the Baltimore Civic Opera, for which Madame Ponselle served as artistic director. She let it be known that she was eager to share her vast experience with the younger generation, assuming, of course, that we were interested.

Very frankly, I wasn’t. While I had no doubt that her comments on the mechanics of singing would be interesting, I was a director. When I presented her with some of my production ideas, I discovered that if Madame Ponselle hadn’t sung a piece, she didn’t know it. Over the years, I staged three works in Baltimore that she never had done- Madame Butterfly, Lucia di Lammermoor and Tosca. Her few comments about my plans for them seemed bland and beside the point. I never came out and flatly said so, of course, I just thanked her for her insights and went my way.

Very much to her credit, she never once misused her great reputation. She never stamped her foot and said this is my company, do it my way or else! Quite the contrary, she treated me with friendliness and respect and never put on airs. However, beneath her bluff and hearty manner, I sensed a woman adrift. The art form that had shaped her life had changed dramatically and left her far behind.

The one opera I staged in Baltimore that Madame Ponselle did know well was Don Giovanni. She first sang Donna Anna at the Met in the 1920s to Beniamino Gigli’s Don Ottavio, with the magnetic Ezio Pinza as the Don. I’m sure those performances were vocally impressive, but I doubt they had much connection to what we nowadays consider proper Mozartian style. Whatever those shows might have been, Madame Ponselle never said a word to me about them. I was bringing her an extremely successful production from the New York City Opera with its entire cast intact, including the great American bass Norman Treigle as the Don and Beverly Sills as Donna Anna. We were a proven hit. What need was there for her to say anything? She inherently understood this and stayed away until opening night.

I was a bit worried about opening night because there was a tradition in Baltimore that Madame Ponselle always took the final curtain call by herself, even on the numerous occasions when she had little connection with the production. I felt that this practice was unfair. It pulled the spotlight away from the artists who had done all the work and shone it on someone quite extraneous.

I said as much to Julius Rudel, the conductor of Don Giovanni and the highly effective director of the New York City Opera, where my production originated.

He looked at me with some bemusement. “I assume that Madame Ponselle will do what she always does on opening night.”

“But she didn’t have anything to do with our show.”

“Ian, Rosa Ponselle is probably the greatest singer America ever produced. She willed the Baltimore Civic Opera into existence.”

“Yes, but she never said a word to any of us- not even Beverly Sills. And Beverly’s doing her part- Donna Anna.”

Julius smiled, patted me on the shoulder and replied, “My dear boy, one day you’ll understand.”

Not long afterwards, I was invited to meet Madame Ponselle at the Villa Pace, an impressive mansion that her former husband had built for her just outside the city center. Once again, she observed the boundaries and was amazingly considerate of a novice director nearly forty years her junior. I sat there stiffly as she launched into the well-worn story of her momentous Met debut as Leonora in La Forza del Destino in 1919. She was barely twenty and had never appeared in an opera before. Her co-star was Enrico Caruso, the most famous tenor of the time, perhaps of all time, who sang the role of Leonora’s lover, Don Alvaro.

Of course, opera at the Met in the 1920s was completely different from what we find there today. Verdi had famously described the art form as “voce, voce, voce.” And that’s basically what it was during Madame Ponselle’s time. She and her colleagues may have looked at one another now and then and gestured a bit, but, basically, they just stood still and devoted all their energy to singing. The drama lay in the sound and shaping of their magnificent voices. The notion that opera might be a complex melding of drama and music, story and song, seemed beside the point. All that mattered then was that the cast sang like angels. You had to hunt very hard for anything approaching realistic acting in the good old days at the Met.

Madame Ponselle surely knew that as a young hotshot director I sought far more theatricality in my productions than she was used to. It soon became evident that she had summoned me to her house because she wanted to broaden my perspective. She was firmly convinced that some performances at the old Met had crackled with theatrical excitement.

She took out a record from the cabinet. “It’s a live recording from 1935, very low fidelity, but you’ll get the general idea. We tore up the Met with this one.” She played the crucial moment in the third act of Verdi’s La Traviata, when Violetta’s lover Alfredo denounces her to Parisian society. It’s a brutal, chilling moment, all the more so since Violetta keeps silent while her lover ruthlessly rips her apart.

That wasn’t how Rosa Ponselle saw it in 1935. At first, the scene proceeded exactly as written. The tenor, Frederick Jagel, in stunning voice, launched into his diatribe with furious conviction. After a few phrases, however, to my complete astonishment, Ponselle’s Violetta started shouting back at him. There’s no mention of this in either the score or libretto, but it didn’t stop our diva from screaming at the top of her lungs for Alfredo to stop tormenting her. “No, no, Alfredo,” shouted la Ponselle, “non farmi cosi. No, no, nooooo!!” Bit by bit, her shrieking completely drowned out poor Jagel’s singing. She had stolen the focus and transformed Verdi’s masterful ensemble into a shouting match. If I’d have been Frederick Jagel, I’d have throttled her.

I sat there, stunned, but Madame Ponselle was oblivious. She was drinking it all in- the magic of the moment, the freedom, the intensity, the drama! For her, this was opera at its best, truthful and passionate; for me, it was a travesty, shameless scene-stealing. Who the hell did she think she was? The most famous soprano of her day, that’s who, with a giant following and record-breaking fees and an enormous recording contract. Why should anyone care if little Frederick Jagel became aesthetic roadkill? The opera was La Traviata. And the great Rosa Ponselle was singing the title role.

The whole episode made me extremely uncomfortable, especially since I was sitting so close to the perpetrator of the train wreck. I steeled myself and feigned admiration, muttering something on the order of, “Wow, that was really astonishing.”

At that moment, as my mind surged with uncharitable thoughts about her artistry, or rather, lack of it, Madame Ponselle went over to her desk and returned with the Mishkin portrait reproduced at the start of this essay. I read the inscription: “To Ian Strasfogel, who brings beauty, drama and life to opera. Sincerely, Rosa Ponselle.”

I was startled by her graciousness and abashed by the warmth and generosity of her words, which sharply contrasted with my own aesthetic hauteur. She drew her chair closer and started confiding in me. “You know, Ian, I always had a hell of a time with nerves. My debut at the Met, that big night at age twenty, I was shaking in my boots at the enormity of it all. But, you know, Caruso was shaking too and he’d been singing a long, long time, so that made it a bit easier. We got through it somehow and from that moment on, I never looked back.” She touched my arm confidingly. “Still, I never got rid of those damn nerves. I’d be so scared the day of a performance I’d literally get sick to my stomach. One day, it was before a Met Carmen in the 1930s, I was kneeling over the toilet in my dressing room, retching up my supper, when I suddenly thought, ‘This is insane. I’ve got to stop.’ And so I did. Boom! Just like that. I was still in my thirties.”

I was shocked. I hadn’t known that she had given up singing so early. The best years for most singers come in their forties or even fifties. The bass Paul Plishka, a Metropolitan Opera stalwart, sang beautifully well into his sixties. But Rosa Ponselle, the possessor of one of the most glorious voices in the history of opera, gave it up before she had turned forty, when she still was in her prime. What a loss for the world of opera.

But was it a loss for her? In later years, she maintained not. She told interviewers that she felt relieved that she no longer needed to be the great diva.

Brave, impressive words, but I’ve never fully trusted them. The old woman I chatted with at the Villa Pace struck me as a troubling, troubled figure, very much alone, very much ensnared in the triumphs and miseries of her past. Of course, I was young then and prone to snap judgments.

Now I can be more compassionate. I’ve learned that Rosa’s later years were extremely difficult. She followed her retirement from singing in the 1930s with an ill-considered marriage to a Baltimore socialite, the man who built Villa Pace for her. Theirs was a childless union characterized by too much drinking and too little genuine affection. When Rosa finally got a divorce, she suffered a major breakdown. In some ways, the Baltimore Civic Opera represented a communal effort to cheer the great diva up and send her in a new, more positive direction.

While composing this piece, I kept listening to a wide range of Madame Ponselle’s recordings, some from her glory days, others from late in her retirement. In every case, I heard a stellar, rapturous voice with no trace of the terror that lay behind it. By what alchemy had she transcended her fears, her existential agony, to give us such vocal perfection, such profound, indelible beauty?

Let these recordings, not her frailties, be her legacy.