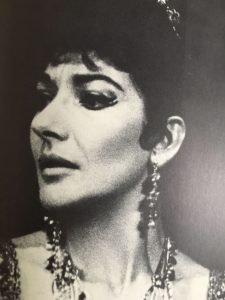 I’m one of the lucky few who actually saw Maria Callas perform – a Tosca at the Metropolitan Opera in 1965, her next to last performance there- and I’ve never forgotten it. She transformed the theater into a sacred space.

My history with Callas began during my teenage years in the 1950s. My father’s position on the Met’s musical staff gave me free entry to all its stage rehearsals and performances. Though that sort of easy access is unthinkable today, back then, the Met functioned more like a cozy family than a major opera house. I was treated like a coddled younger son. To make things even easier, my overcrowded high school operated on a split session schedule, so either my mornings or afternoons were completely free. This meant I often went to daytime stage rehearsals and saw some of the world’s greatest singers as they developed a new production. I observed close up artists like Eleanor Steber and Leontyne Price, Birgit Nilsson and Kirsten Flagstad, Leonie Rysanek and Elisabeth Schwarzkopf, Zinka Milanov and Renata Tebaldi, Mirella Freni and Renata Scotto, and that’s just a few of the sopranos. Thanks to their magnificent work, and that of many, many others, I became an opera addict.

It would have been easy for me as a newly minted devotee to have attended every one of Maria Callas’ Met performances in 1956, when she was in magnificent voice and sang many of her greatest roles. Instead, I boycotted them. I was young and headstrong and took an adolescent stand against “star” singers. I told my startled parents that what mattered most was the artistic whole, the work of the entire ensemble, not the overpaid, overpraised work of a self-serving vocal showoff. Hadn’t the great Arturo Toscanini once said, “The only stars are in heaven”?

My parents tried to explain that certain operas only make their effect with a great artist in the title role. Donizetti’s Lucia di Lammermoor or Bellini’s Norma cannot work without a galvanizing leading lady. They also pointed out that Maria Callas wasn’t an addle-brained diva. She worked as hard as anyone else, harder even, in the pursuit of artistic truth. None of their sage comments made the slightest impression. I held firm to my convictions and refused to see her work. I did eventually weaken and attend one stage rehearsal of Norma, but on that occasion, she hardly uttered a sound. I took it as proof that she was a pampered, overpraised product of the press and vowed never to hear her again.

It was nine years before Maria Callas returned to the Met. By then, my attitude had transformed. I was in my mid-twenties and regularly staging works at the New York City Opera and various regional companies. I fully understood how essential a prima donna could be and was well aware that Maria Callas was in a class by herself, a hardworking vocal and theatrical genius entirely in service to the score.

Most people in New York shared my opinion. Tickets for her return, which only amounted to two performances of Tosca, were almost impossible to obtain. Hundreds of people slept in front of the theater the night before her shows went on sale. Thousands more lined up at the box office later and were sent away empty handed. Fortunately, as a company member, my father was allowed to buy me a seat for her first performance.

Maria Callas’ return on March 19, 1965 was carefully calibrated, nothing had been left to chance. Fausto Cleva, with whom Callas had worked happily during her Met appearances in 1956, would conduct. Even though she much preferred being offered a brand-new production expressly conceived for her, the diva allowed the company to revive its old but serviceable staging from the early 1950s. (Its Greek-American director, Dino Yannopoulos, had been a good friend of hers since her student days at the Athens Conservatory.) Two great artists, longtime colleagues at La Scala, were engaged for the other leading roles. Franco Corelli, arguably the most thrilling Italian tenor of the day, agreed to sing Cavaradossi, Tosca’s doomed lover. Tito Gobbi signed on to portray the villainous Baron Scarpia, a role he had brilliantly sung with Callas the previous month in Paris.

The theater that evening was jammed with opera fanatics. Anticipation ran absurdly high. So great was our eagerness to hear her that when Callas sang her first offstage lines, we let out a collective gasp. She actually was in New York! She actually was going to sing! Childish, no doubt, ridiculous, but we had all missed her so much and hoped so fervently for her return that the first hint of her incisive, almost acidic voice hit us like a hammer stroke.

When she made her entrance a short while later, we exploded in tumultuous applause. Despite all our cheering, despite the utter pandemonium besieging the opera house, she did something quite remarkable: she pretended we weren’t there. She wasn’t the world-famed Maria Callas any more, she was Floria Tosca, Puccini’s impulsive diva, red hot furious with her thoughtless lover who had kept her waiting on the street. No matter how wildly we shouted, she faced Cavaradossi angrily and never once strayed from the scene. By the time the music resumed, her charisma, her supercharged physicality had imprinted on us exactly who her character was- an impulsive, passionate woman hopelessly in love with a revolutionary. The scene that followed, all too often presented as a tuneful but bland Italian love duet, surged with erotic urgency. The connection between Tosca and her ardent lover was palpable. Franco Corelli, always vocally magnificent but often theatrically wooden, rose to the occasion. I’d never seen him so alive on stage, so compellingly engaged. La Callas had clearly inspired him.

Strangely enough, the one thing I find difficult to pinpoint all these decades later is how well Callas actually sang. She had rarely performed in the 1960s and there were numerous reports from Europe of significant vocal deterioration. Aside from a botched high C in her third act narrative, she gave no hint at the Met of any difficulties at all. Her voice sounded rich and unforced and commanded our full attention. Though I couldn’t honestly say whether her crucial second act aria was one for the record books, immaculate vocalism wasn’t the point. All that mattered to her (or to us) was expressiveness, musical and dramatic truth. She brought us face to face with Tosca’s suffering and forced us to contend with it. We didn’t see an opera that evening, we witnessed Greek tragedy.

The crux of Tosca’s miseries comes at the end of the second act when Baron Scarpia, the chief of police, announces that he will spare Cavaradossi’s life if she spends the night with him. Tosca has no alternative and looks on grimly as Scarpia writes a safe conduct pass for her lover. What follows is one of opera’s most famous moments. Tosca sees a knife on the small dining table that Scarpia has laid out for the occasion and realizes she must kill him. Over the many decades since Tosca’s premiere, singers and directors have contrived various ways to portray this crucial event. Some prima donnas have nervously spilled a glass of wine and as they mop it up, they stumble across the obliging fruit knife. Others have leaned back against the dinner table in despair and in doing so, accidentally placed their hand upon the weapon. All such contrivances produce an effective little jolt and keep the story moving. But they’re basically just tricks.

Callas did something quite different, something bolder and technically far more difficult. She simply saw the knife. She used no effects, no gimmicks. She just concentrated on the knife, and as she did so, her body taut with animal tension, everyone in the vast auditorium gasped. The public that evening was highly sophisticated; we all knew exactly what was coming. And yet, we didn’t; we were completely shocked. How could such a familiar moment have felt so fresh to us, so totally, horribly alive? I’m sure it was because Callas showed us what the moment meant to her character. She gave us the subtext, the story behind the story. Her Tosca saw the knife and realized at that split second that she would have to kill the loathsome Baron Scarpia. The prospect of murdering him shamed her, sickened her, terrified her. And that is why we gasped.

The second act of Tosca famously ends with a long mime after Tosca has killed Scarpia. She is ready to rush off to her lover when she remembers that she needs the safe conduct pass. She searches frantically through Scarpia’s cluttered desk, but it isn’t there. Increasingly desperate, she races around the room hunting for the document. Suddenly, horribly, she realizes that it is still clutched in the dead man’s hand. She pries it free, collects her things and is about to leave when she has a change of heart. She can’t leave the police chief’s corpse unacknowledged. With solemn ceremony, she places candles at Scarpia’s outstretched arms and a crucifix on his chest. Only then, finally, can she rush out the door to save her lover.

For me, this mime, when Callas didn’t sing a single note, was the highpoint of the evening. She performed the actions exactly as specified in the score, but they felt completely new. Her depiction of Tosca’s horror at having killed Scarpia was so vivid, that I was afraid she was going to throw up. It was acting, of course, but so close to the bone, so extremely, explicitly real, that I was completely lost in the moment, sucked into the vortex of her volcanic talent. This in your face actuality, this larger than life reality was the unique genius of Maria Callas. No one has rivaled it before or since.

But that wasn’t all. The great diva had worn a beautiful silk organza shawl of exceptional length for the entire act, which she used to reflect her nervousness and authority. As she went to the door, still panting in terror from the murder, she let her long shawl trail behind her, a grim reminder of her murderous presence. Even after she was lost to sight, the shawl kept slowly, inexorably sliding across the marble floor. As the final chord sounded, suddenly, violently, it was pulled off stage, as if in a fit of fury or fear. The effect hit us like a slap, a punch. We went wild.

And with good reason. We had witnessed a theatrical marvel. I’ve seen many of the world’s greatest actors- from Laurence Olivier to John Gielgud, from Vanessa Redgrave to Helene Weigel, from Gustav Gruendgens to Jean-Louis Barrault. None of these splendid artists, not one, could rival the raw theatrical command of Maria Callas.

I said at the beginning of this essay that she had transformed the Metropolitan Opera House into a sacred space. I meant it quite literally. On that memorable evening in 1965, she showed us the true cost of Tosca’s desperate deed, the living hell she went through. Aristotle once proposed that the purpose of tragedy was to confront its hero with an action so grave and so profound that his (or her) reaction to it would unleash in the public the twin emotions of pity and awe. I pitied Maria Callas and her terrified, doomed Tosca. And I was in awe of her.