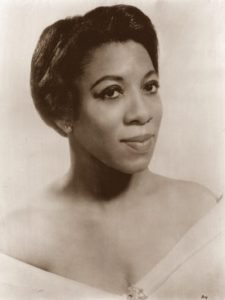 Before you meet Chico, let me introduce his hostess, Ella Lee, the American soprano. She was part of the extraordinary group of Black singers who electrified the world of opera in the 1960s- Leontyne Price, of course, George Shirley, Martina Arroyo, Grace Bumbry, Simon Estes, Shirley Verrett, Reri Grist, Betty Allen, Veronica Tyler, Gloria Davy, among many others.Ella is perhaps less well known than her distinguished colleagues because she came to prominence in the 1960s at the Komische Oper in what was then East Berlin. Even though she primarily sang in the east, Ella lived in a sprawling apartment in West Berlin and commuted regularly to rehearsals and performances despite Cold War tensions. Berlin was very much on edge in 1961. The Wall was just in its infancy- a coil of barbed wire cutting through the heart of the city with heavily armed troops glowering at one another across it. Ella sang a number of leading roles at the Komische, including a riveting Tosca and a sultry Titania, the queen of the fairies, in Benjamin Britten’s A Midsummer’s Night Dream. (Ella was certainly a queen, but far too earthy for fairyland- which was exactly the director’s intent.)

For me, though, despite her considerable vocal and dramatic gifts, Ella was a hostess par excellence, a one-woman Welcome Wagon. Her large shambling apartment in West Berlin served as a catch-all for ex-pat musicians, mainly opera singers, eager for a home-cooked Southern-style meal and some juicy shop talk. It was there that I met American tenor John Moulson, who later joined Ella at the Komische Oper and Catherine Gayer, a coloratura at the Deutsche Oper in West Berlin. Abe Polakoff, an excellent free-lance baritone, dropped by occasionally, as did Friedelind Wagner, best known as Mausi, the one good Wagner grandchild, the only true democrat in that Nazi-cursed clan. Mausi had had the intelligence and courage to flee Germany in 1939 and live in self-imposed exile, first in Switzerland, then England and finally New York, where she became part of my parent’s social circle.

What delightful times we had. Ella was bright and funny and endlessly, tirelessly hospitable. We could always find heaps of delicious soul food on the dining room table to stave off hunger and keep the talk flowing. (The ingredients had been purchased at cut rate prices from the Army PX by Ella’s slender, shy soldier husband Thornel.) In that merry household of gossip, laughter and botched German, the subtext always seemed to be: we’re young, we’re talented, who cares if Berlin explodes. During 1961 and 1962, the years I most often went there, East-West tensions were high. Pundits solemnly warned of an armed confrontation at the newly built Berlin Wall. It never materialized, thank god. Instead, day after day, Ella Lee showed her American passport to grim-faced East German border guards and crossed over to rehearse and perform at the Komische Oper with no problem at all.

One day I spotted a chunky, curly-haired newcomer curled up on Ella’s big sofa, oblivious to the hilarity surrounding him. Ella explained that he was this Argentinian kid, a hotshot young pianist, who’d be crashing at her place for a while. Mausi Wagner had vouched for him, so she figured he’d be fun, even though all he’d done since he got there was sleep. His somnolence was easily explained: he’d just finished a concert tour of Australia and New Zealand where he played 59 recitals in 62 days.

As the weeks passed, Ella’s young houseguest, whom she nicknamed Chico, “the kid from Buenos Aires,” became a regular. At first, he barely said anything. He’d scrunch up in a chair off to the side, reading a book or, more likely, a score, ignoring our lively chatter. At mealtimes, he’d dart into the dining room, heap a plate high with Ella’s treats, then zip back to his bedroom and slam the door behind him. Other times, we’d cluster around Ella in her kitchen as she prepared some delightful new dish, while Chico practiced full out in the living room. He was preparing the Furtwaengler piano concerto for a performance next year with the Berlin Philharmonic. It was a bear of a piece, long and thorny, notes and more notes. Furtwaengler had written it for the distinguished Swiss pianist Edwin Fischer, who found it so difficult he stopped concertizing for six months to master it. Chico said it wasn’t really all that hard; he could cram it into his schedule without canceling a single performance. His practice sessions were uncanny. He’d go through a section from beginning to end, never stopping for adjustments or corrections, then blaze on ahead to the next. He never seemed to play a wrong note.

Gradually, Chico’s shyness (or aloofness or rudeness) wore off. Much to our amusement, he and Ella fell into a quirky baby brother-big sister routine. Each week, there’d be more banter between them, more sassy, quick-spirited sniping between the sultry soprano and her smart-ass young visitor. I’m happy to report that Ella matched motor-mouthed Chico quip for quip and very much held her own. Their gags and japing were extremely entertaining but much as in Shakespeare’s Much Ado About Nothing, where the spirited banter between Beatrice and Benedick belies the deep physical attraction between them, there was an erotic subtext to their sparring. At the time, I was too inexperienced and naïve to see it. To me, Chico was just a kid, one of a multitude of gifted pianists. I ignored the possibility that to Ella, and women in general, this high-powered Argentinian prodigy might possess more than merely musical appeal.

One day, Ella and her husband went out on errands, leaving Chico and me alone to chat in their rambling, sparsely furnished flat. I have to confess that up to then I’d been pretty heavily influenced by Mausi Wagner’s view of him as a sort of modern-day Cherubino- a promising pianist, no doubt, but overly fond of the ladies and more than a tad immature. In addition, Chico was a few years younger than me and when you’re in your teens or early twenties, even a slight age difference can seem significant. Since I was older than him, I considered myself his intellectual superior. (I’d just graduated from Harvard, Phi Beta Kappa, while all he’d done was play concerts.) I have to confess I talked down to him.

But not for long. The cocky kid who had gleefully joked and jousted with Ella Lee swiftly gave way to a confident young artist- wise beyond his years, articulate and engaging. I was struck by his sunny calm, his steadfast self-assurance. Back home, I had been shaken by the deferred dreams and frustrated hopes of my father, whose brilliant start in Weimar-era Berlin had been short-circuited by the Nazis. Dad struggled for many years to reignite his career in America. He finally was invited to join the music staff of the Metropolitan Opera, playing rehearsals and coaching singers, though what he really wanted to do was conduct. His big break came in 1957 when he jumped in to conduct Eugene Onegin and Vanessa, following the sudden death of Dimitri Mitropoulos, the original conductor. Despite excellent notices, he stayed right where he was. The Met management never asked him to conduct again, except in a dire emergency. My sweet-tempered, soft-spoken father never openly complained about this but my mother often did. I, who loved my father very much, too much, perhaps, worried about his prospects and resented the injustice of the world of music. This colored my attitude towards the cocksure young pianist.

The world of music certainly hadn’t been unjust to Chico. As he sprawled on Ella’s oversized sofa, he amiably narrated his numerous plans and prospects. Without being boastful or arrogant, he made it clear that he was essentially a made man. Agents and impresarios were begging for his services; he could do most anything he desired. I was astonished. How could he be so sure of this? How could he exude such self-confidence? You must bear in mind that I’d never heard him play and knew nothing about his formative years, when the great Wilhelm Furtwaengler was his mentor and promoter and the distinguished pedagogue Igor Markevitch asked him to join his Salzburg Festival conducting class at the tender age of twelve.

Had I been aware of all that, I probably wouldn’t have been so surprised when Chico said he was going to become a conductor. “You mean you’re giving up the piano?”

“And you’ll continue to play recitals?”

“Of course.” Again, that calm certainty of his, that eerie self-assurance.

“But how can anyone be both a conductor and a pianist? They’re two quite different careers.” I couldn’t think of any contemporary musician who had done it. Yes, Leonard Bernstein and George Szell played the piano well, but they rarely performed in public. How could Chico’s career plan actually work?

He laughed and shrugged his shoulders. He still was draped across Ella’s big sofa, savoring his glittering prospects. Lucky youth, golden youth, I marveled at his ease, his radiant certainty that he was among the elect.

It suddenly occurred to me that if he did become known as a conductor, then maybe one day the two of us could work on an opera together- I as director and he as conductor. I didn’t say it quite as baldly as that. I just asked if he’d ever consider conducting an opera. (Without really knowing it, I was already deferring to him, even though he was a few years my junior and a few inches shorter.)

“Really? That’s one of my favorites too.” I’d seen Mozart’s masterwork countless times at the Metropolitan in classic performances conducted by Karl Boehm, Josef Krips and Loren Maazel.

Chico noticed a score of it open on Ella’s piano. (I think she was learning Donna Elvira at the time.) “The opera has a fantastic beginning,” he said and gestured for me to join him on the not very wide piano bench. “This is how Furtwaengler performed the opening chords in Salzburg a few years back. He added this crazy fermata.”

All these years later I still vividly remember the shock of those first few measures, the explosion that the curly-haired Argentinian kid unleashed. The piano became a full Mozartian orchestra in all its terror and glory. The gap between the opening chords was indeed far longer than Mozart intended, but Chico somehow or other made it work. When he finally let the next chord come crashing down, it had a remarkable, shattering effect.

The demon at the keyboarded transformed back into Chico, calm, self-confident, poised. “Actually, I think Furtwaengler rather overdid it. I feel it much more like this.” He played the opening again, this time his way, without the gigantic fermata, and continued through to the end. I had heard Don Giovanni countless times, but never before or since have I heard its overture performed with such ominous, inexorable force.

This turned out to be the only true moment of closeness that Chico and I ever shared. The last time I distinctly remember seeing him was in London in the late 1960s after a rehearsal of Schubert’s Trout Quintet with a group of dazzling colleagues. He was still Chico- bright, ebullient, witty, but our paths were clearly diverging. And fast.

Over the decades, Chico has attracted an international following for his exceptional music-making: his recordings of the complete Beethoven piano sonatas, his traversal of all the symphonies of Beethoven, Brahms, Bruckner and Mahler with the world’s most important orchestras, his Ring cycles in Bayreuth, Milan and Berlin, his stirring performances of the four-hand repertoire with his Argentinian compatriot, Martha Argerich and so on, ad infinitum.

But for me Chico’s finest accomplishment remains his rendition of the overture to Don Giovanni as I sat next to him on the piano bench in Ella Lee’s apartment, awestruck.

(Yes, you’ve guessed correctly, Chico was, and is, the incomparable Daniel Barenboim.)

Join the discussion and tell us your opinion.